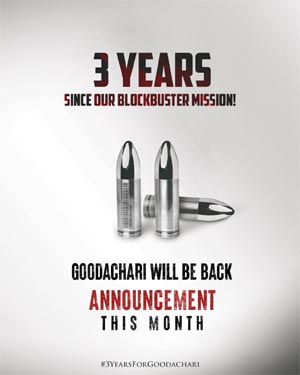 Young hero Adivi Sesh is making his entry in Bollywood with a patriotic Pan India project Major which has completed its major shooting part.Soon after wrapping up this project, Adivi Sesh will be doing a sequel for his biggest blockbuster Goodachari which completes three years today.

The action spy film was directed by Sashi Kiran Tikka. Anil Sunkara, TG Vishwa Prasad, and Abhishek Agarwal who produced the first part will bankroll the second installment as well.

Adivi Sesh who penned the story and screenplay for Goodachari is working on the script for the sequel too. Watch this space for more updates on this project.