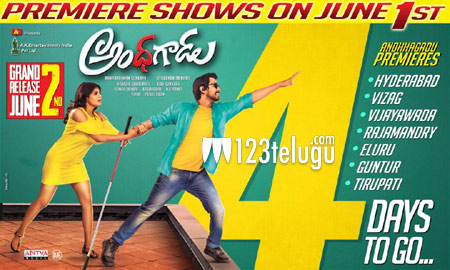 Young hero Raj Tarun and Hebah Patel starrer romantic entertainer, Andhagaadu, is slated for its release on June 2nd. But, as per the latest update, the film’s makers are planning to organize serial premieres across the twin Telugu states on June 1st.

Andhagaadu will reportedly be premiered at various theaters in Hyderabad, Vizag, Rajahmundry, Eluru, Vijayawada, Guntur and Tirupati on the evening of June 1st.

Raj Tarun will be seen as a visually challenged man for the first 30 minutes of the movie. Writer Veligonda Srinivas is making his directorial debut with this movie. Anil Sunkara has bankrolled the project.