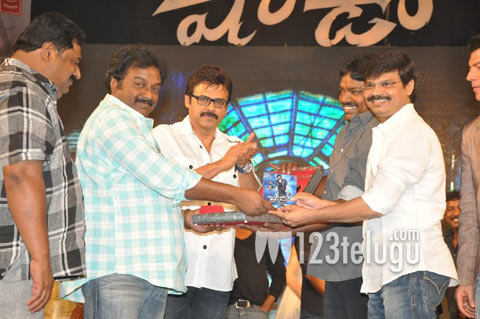 Victory Venkatesh’s much awaited action entertainer, Shadow’s music was launched grandly yesterday at the Shilpa Kala Vedika in Hyderabad. The whole cast of the movie attended the event and made it a huge success. Music director S S Thaman and singer Geeta Madhuri performed live and entertained the audience. Bollywood star Aditya Pancholi, who plays the bad guy in the film also attended the launch. Other stars of the movie like Tapsee and Srikanth spoke highly about the film and its peppy music. Directed by Meher Ramesh, Shadow is all set to hit the screens this Summer.