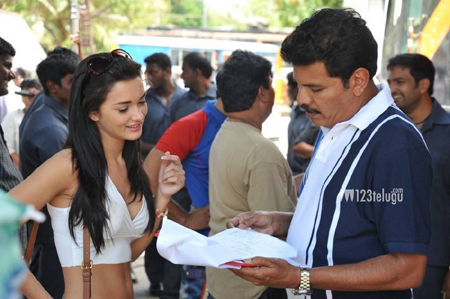 Shankar’s upcoming film Manoharudu is almost complete, except for a song. Vikram and Amy Jackson have played the lead roles in this romantic thriller. Aascar Ravichandran is producing this big budget film.

The film’s shooting is expected to be wrapped up later this month and this last remaining song will be shot on Amy Jackson. The song is reportedly her introduction song in the film and the actress is quite excited about it. Meanwhile, the film’s production is going on in full swing and recently, Vikram had wrapped up dubbing for the first half of the film. The whole unit is going gaga over Vikram and Shankar for the kind of work they have been doing in this film. In fact, cinematographer PC Sreeram said, “The film will once again prove Vikram’s acting caliber and it’ll be a milestone in his career.”

A R Rahman is scoring the music and the film will release in Telugu and Tamil. If all goes well, the film will hit the screens later this summer.