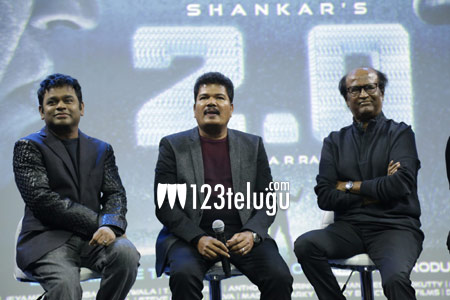 The grand first look launch event of Shankar-Rajinikanth’s high budget sci-fi thriller, 2.0, took place in Mumbai last night amid the presence of some of the country’s most adored celebrities.

Even as fans are thrilled with the just released first look posters, director Shankar took the excitement to an all-time high with his thrilling revelation. Shankar had confirmed last night that there will be a third part in the Robo franchise. However, the maverick genius didn’t reveal any additional details about the part 3.

Meanwhile, 2.0 is nearing its completion and the team will soon get busy with an exhaustive post-production work. The film is slated to open in cinemas during Diwali, 2017.