In view of the Coronavirus outbreak, several Tollywood stars have been chipping in with their timely support and are donating huge amounts to to the governments of the twin Telugu states and for the relief of the Telugu film industry employees. The latest star to join this bandwagon is Sharwanand.

Earlier today, Sharwa announced that he is donating Rs 15 lakhs to the Corona Crisis Charity (CCC) fund which has been set up by the Telugu film industry. The CCC takes care of the daily wage workers who are severely affected by this crisis.

“Daily wage workers are the most hardworking and diligent on sets. Now they are severely affected by this crisis. In these tough times, I would like to contribute Rs 15 lakhs to the CCC initiative and support them,” Sharwanand said in a note. 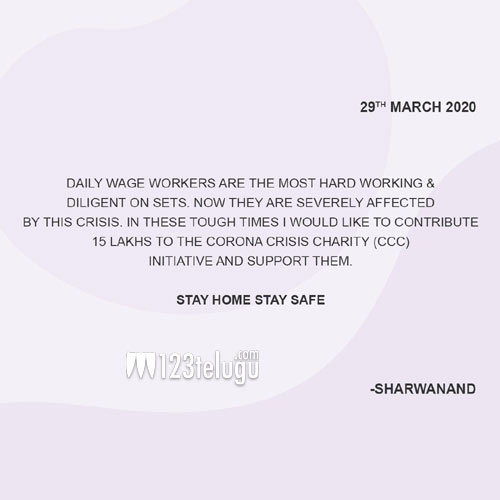