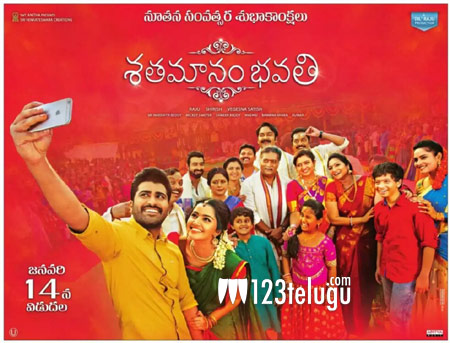 Shatamanam Bhavathi, the much-awaited romantic family entertainer starring Sharwanand, Anupama Parameswaran, Prakash Raj and Jayasudha in prominent roles, will be hitting the screens on the 14th of January as a Sankranthi treat.

Shatamanam Bhavathi is a village based family drama. A majority of the film’s shooting took place in the picturesque Godavari region. Popular screenwriter Satish Vegesna had directed this movie and Dil Raju has produced it.

Shatamanam Bhavathi will be competing with two of the most eagerly awaited biggies, Gautamiputra Satakarni and Khaidi No.150, this festive season.