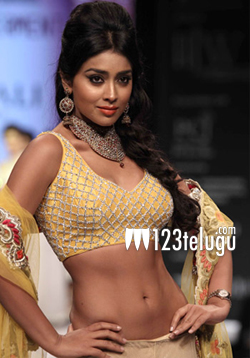 Shriya Saran has reportedly signed a new film after a long gap. She was last seen in Janardhan Maharshi’s Pavitra in which she played the role of a prostitute who becomes a politician. Although that film sank without a trace, she bagged one of the lead roles in Vikram Kumar’s upcoming film Manam. She’s paired up opposite Nagarjuna in this film which also stars ANR, Naga Chaitanya and Samantha.

The latest news is that she has signed a Malayalam film in which she’s going to play a powerful character. K R Unni is going to direct the film and it also stars Andrea Jeremiah in a lead role, apart from Lal and Prakash Raj. Incidentally, Andrea Jeremiah acted in Tadakha and Vishwaroopam which clicked quite well with the audience in Telugu.

As per the reports in Malayalam film circles, in this film, Shriya Saran and Andrea Jeremiah belong to a Reddiar family and that it’s going to be a complete entertainer. The film will soon be shot in Thenkasi and Thirunelveli.