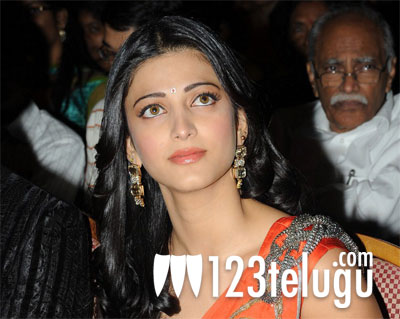 In Gabbar Singh, Shruthi Hasan is playing the role that Sonakshi did in Dabaang. The role of a coy village girl is the very opposite of her bubbly, urban upbringing. But the actress is quickly coming to terms with her role and the expectations of acting with a big name like Pawan Kalyan. She says she is only focusing on her character and will leave the rest to the producer and director. “My aim is to do 100% justice to my character. Market dynamics will dictate the rest”, she adds. When asked as to how to she selects her roles, she said she is not as big a star as her dad Kamal is, so she will stick to the basics. On a thoughtful note she concludes that an actress will not have as much creative freedom as an actor. Shruthi expressed confidence that Gabbar Singh will be lapped up by the local audience. Currently she is eagerly awaiting the release of the “3”.