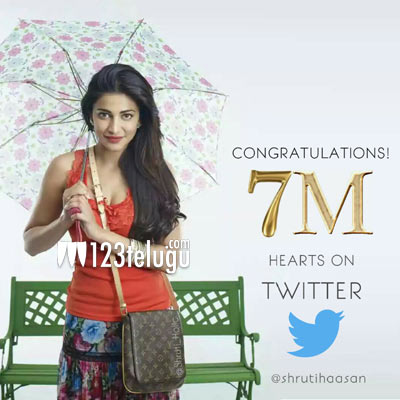 Shruti Haasan is one actress who is equally popular in Bollywood and in the South. The actress has an immense fan following, which has now resulted in rare achievement. Today, Shruti Haasan became the only South Indian film star to get over 7 million followers on Twitter.

After the release of her 2017 movies – S3, Katamarayudu and Behen Hogi Teri, Shruti has been on a hiatus. She has recently signed a Bollywood flick opposite action hero Vidyut Jammwal. On the personal front, Shruti is rumored to be tying the knot with her Italian boyfriend Michael Corsale sometime next year.