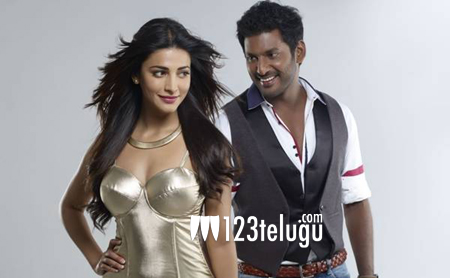 After a brief hiatus, Shruti Haasan has returned to the sets of her upcoming Tamil film, Poojai. She’s playing Vishal’s romantic interest in this mass entertainer and Hari is directing the film. The first schedule was shot back in April in Chennai and the film unit will be shooting in and around Coimbatore for the next few days.

It’s been a great year so far for Shruti Haasan with both her Telugu films – Naayak and Race Gurram turning out to be hits. Despite the back to back hits, she hasn’t signed any Telugu film as of now since all her dates are blocked for her Tamil and Hindi projects. Apart from Poojai, she is also shooting for Anees Bazmee’s Welcome Back.

Her next project is a Hindi film in Tigmanshu Dhulia’s next titled Bichde Sabhi Bari Bari and she’ll be playing two different roles including that of an elder woman.