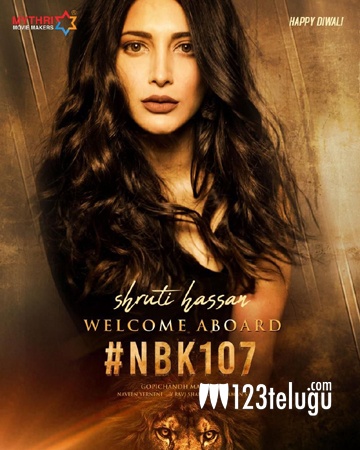 Finally, the suspense on the actress who will be playing the female lead opposite hero Balakrishna in the much-awaited 107th film under Gopichand Malineni’s direction has ended this evening. On the occasion of the Diwali festival, the makers of this crazy project officially announced that svelte Chennai beauty Shruti Haasan has been roped in as the leading lady.

This will be the first time that Shruti will be sharing screen with Balayya, while the film marks Shruti’s hat-trick with Gopichand Malineni after Balupu and Krack. The Balayya-Shruti Haasan film is going to be an out-and-out mass entertainer. Leading Tollywood production house Mythri Movie Makers is bankrolling the project and Thaman is composing the music.