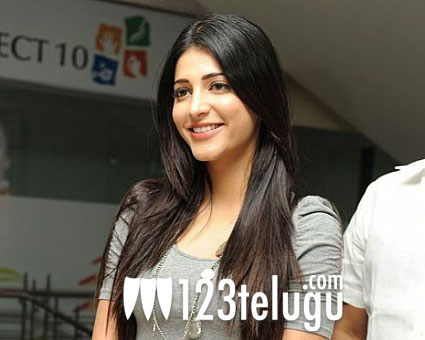 It’s turning out to be quite an interesting year for Shruti Haasan, as far as her signing career is concerned. Earlier this year, she sang couple of songs for Race Gurram and another Tamil film titled Maan Karate. Besides, she has been meeting quite a few popular musicians and lyricists, including Ilayaraja, over the past couple of weeks in Chennai and Mumbai.

The latest buzz is that she’s going to croon a song along with Kapil Sharma, a popular TV actor and host of ‘Comedy Nights With Kapil’. Apparently, it was Kapil Sharma who initiated the discussion about singing the song since he has always wanted to pursue a career in singing. Since Shruti Haasan is an accomplished singer, she was reportedly quite excited about it and the duo will record the song soon. Sukhwinder Singh is going to compose this song and Coke Studio will produce it.

Meanwhile, Shruti Haasan flew to Dubai earlier today and she’ll be shooting for her upcoming Hindi film there for the next few days. The actress will soon be seen in Welcome Back and Gabbar, apart from Allu Arjun starrer Race Gurram, later this year.