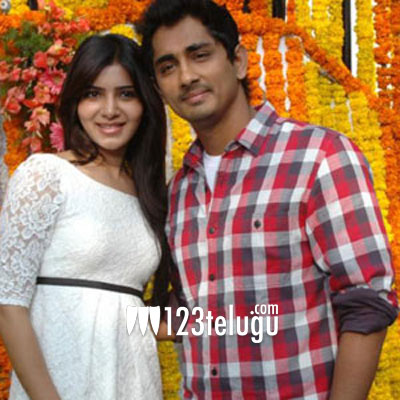 The principal shooting of Siddharth’s upcoming film in Nandini Reddy’s direction is nearing completion. Samantha is playing the lead role opposite Siddharth in this romantic film and buzz is that she’s playing a muslim girl in the untitled film. Nithya Menen is playing an important role. The entire film’s shooting has been wrapped up except for a song. Recently, a song was filmed on Siddharth and Samantha in Annapurna Studios. “My Nandini Reddy film with @Samanthaprabhu2 is done except for one song.Very happy with it!Release date announcement as soon as I know it:),” Siddharth posted on Twitter. Bellamkonda Suresh has produced the film. S S Thaman has composed the music. This is Nandini Reddy’s first film after the success of Ala Modalaindi and there are lot of expectations on this combination.