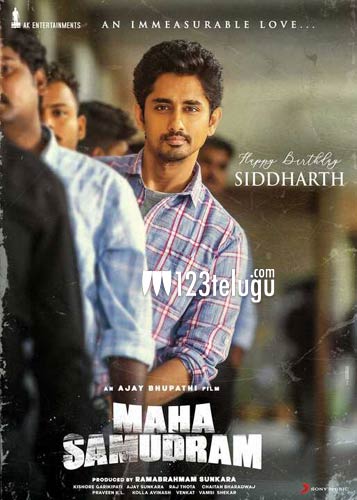 Hero Siddharth is celebrating his birthday today. The makers of Sid’s comeback Telugu movie, Maha Samudram, unveiled his first look poster just a while ago. As ever, Sid looks charming in a boy next door avatar in the breezy poster. Incidentally, the film’s first look poster that was released earlier this year featured Sid in an aggressive avatar.

Sid waited for over 8 years to get the right script for his Tollywood comeback. He signed the Sharwanand, Aditi Rao Hydari and Anu Emmanuel-starrer intense romance action drama which is being directed by Ajay Bhupathi. Anil Sunkara is bankrolling the film under AK Entertainments banner. Chaitan Bharadwaj is rendering the soundtracks. Maha Samudram is slated for release on August 19.