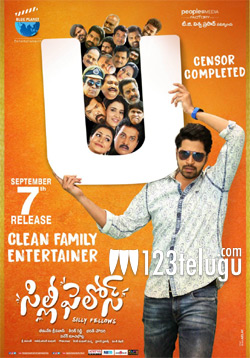 Sunil and Allari Naresh have teamed up with director Bheemineni Srinivasa Rao for a comedy entertainer called Silly Fellows. The latest we hear is that the film has wrapped up its censor formalities with a clean U certificate.

Happy with the outcome, a promotional song of the film was also released by the makers today. The comedy caper will be out on the 7th of September along with many other low budget films.

Producer Anil Sunkara will release the film in Nizam and a few other areas.