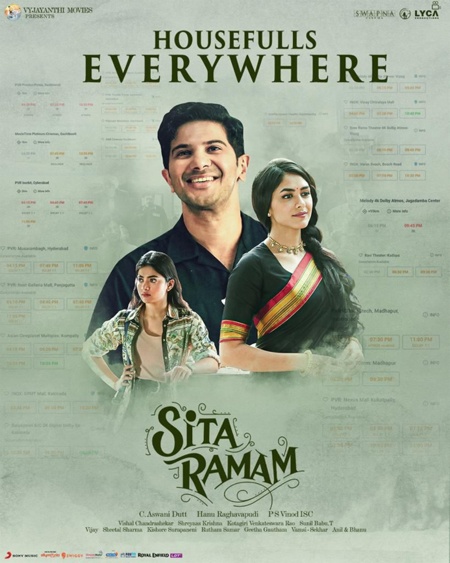 Sita Ramam is a film that has been promoted quite well in the past few days. Having Dulquer Salmaan and Mrunal Thakur in the lead roles, it is directed by Hanu Raghavapudi. The film registered decent collections on its first day.

Today the film has shown a fair amount of growth and some centers are posting better numbers than on day 1. The occupancy has seen very good growth in cities like Hyderabad, Vijayawada, and Vizag.

Looks like good word of mouth, attractive performances, critical acclaim, and poetic narration helped the film big time to post good numbers on day 2. The performance has been very fine in A centers especially.

The film has inched past the $200K mark in the US and Saturday’s bookings are also good. Also, the film is expected to rake in good numbers in AP and TS on Sunday.

It stars Sumanth, Rashimka Mandanna, Sachin Kedkar, and Tharun Bhascker in other key roles. The film is produced by Ashwani Dutt and the music is given by Vishal Chandrasekhar.