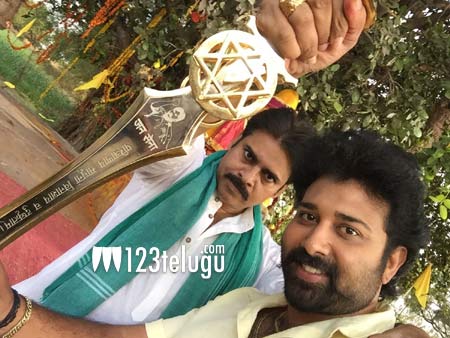 Actor Siva Balaji, who’ll soon be seen in Katamarayudu, has gifted a specially designed sword to Powerstar Pawan Kalyan. The actor is playing the role of Pawan Kalyan’s brother in this action drama which will hit the screens on March 24.

Talking to a leading newspaper, Siva Balaji said that the Powerstar has been very affectionate towards him right from day one of the film’s shoot. So, he wanted to do something special to return the favour. “Initially, I wanted to invite him for dinner at my place, but later, I made up my mind to gift him a sword. I went to Dehradun, where good quality swords are made. I also wanted to present my thoughts on the sword, so I added things like the Sri Chakram, the Jana Sena party symbol and a picture of Pawan Kalyan sir on it,” Siva Balaji said.

Pawan Kalyan was said to be quite thrilled with the gift and thanked him for the sweet gesture.