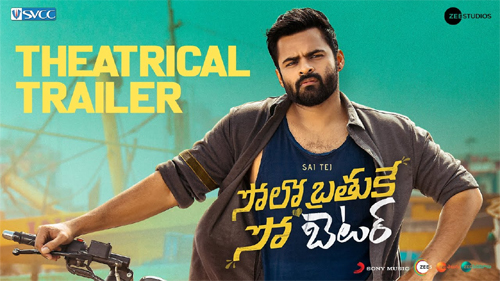 Young stars Sai Dharam Tej and Nabha Natesh’s youthful romantic entertainer, Solo Brathuke So Better, is the first big Telugu film which is releasing in the post lockdown scenario. The film is slated to open in cinemas on December 25 as a Christmas treat.

SBSB’s makers today unveiled the film’s trailer. The trailer tells the story of a young man (Sai) who follows his idols Mother Teresa, Abdul Kalam, AB Vajpayee, Lata Mangeshkar and our very own firebrand R Narayanmurthy and decides to remain a bachelor forever. He even preaches everyone about leading a tension-free life without love, marriage and other commitments. What happens when a beautiful young girl enters his life forms the main crux of the story.

Debutant Subbu has directed this promising entertainer and veteran producer BVSN Prasad has bankrolled it. Thaman is the music composer.