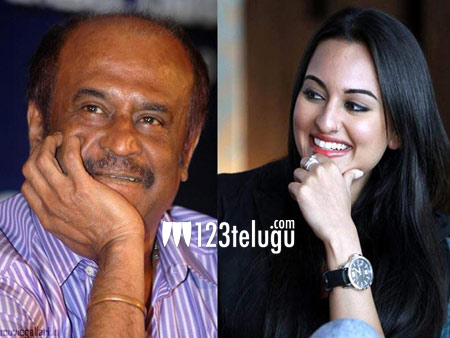 There’s no denying that almost every actor, who has worked with Rajinikanth, sings praises of his humbleness and down-to-earth attitude. In fact, Rajinikanth himself makes it a point to make
everyone feel comfortable so that they don’t get overwhelmed with his star power. The latest to join in this list is none other than his co-star, Sonakshi Sinha.

After acting in a string of Hindi films, Sonakshi Sinha is all set to make her debut in South in Rajinikanth’s upcoming film Lingaa. She joined the film’s sets in Mysore earlier this month and already, she wrapped up shooting her portion in the first schedule. Although it’s just been over a week since she worked together with Rajinikanth, she is all praises for his humbleness and said that he was quite shy to act with her. “A beautiful day as i wrap up the first sched for my first Tamil film #Lingaa with an amazing crew that made me feel right at home :),” she said.

Lingaa also stars Anushka in the lead role and Jagapathy Babu is playing an important role. A R Rahman is scoring the music and K S Ravikumar is the director. Rockline Venkatesh is producing the film.