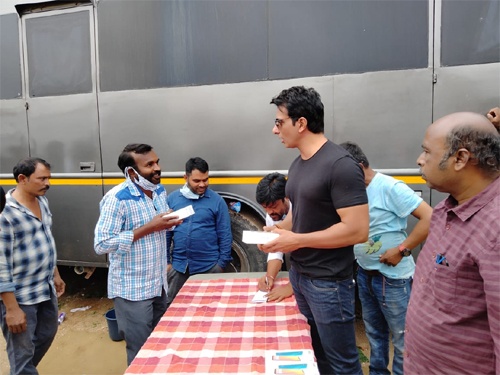 Bollywood star Sonu Sood has not discontinued his humanitarian work even after the lockdown ended and people’s lives are back on track slowly and steadily. In a latest gesture, Sonu has gifted smartphones to the crew members of Megastar Chiranjeevi’s Acharya.

Sonu, who plays a key lead role in Acharya, has been shooting for his part since November. He came to know about the sad plight of the film’s unit members who lost their livelihoods for several months. He gifted new mobiles to 100 crew members earlier today.

Thanks to his selfless service to the poor and needy, Sonu was hailed as the Messiah of the masses throughout the lockdown. His stardom catapulted to the next level and he is now being offered lead roles in Bollywood and Tollywood.