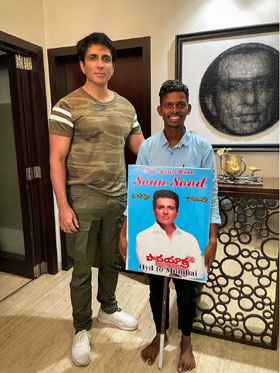 It’s been recently reported that a die-hard fan named Venkatesh from Parigi, Telangana went on a padayatra (walkathon) from Hyderabad to Mumbai to meet Sonu Sood. Throughout his journey, Venkatesh, who was walking barefoot, carried a flex featuring Sonu Sood’s picture.

Venkatesh’s dream came true earlier today, as he finally met Sonu at his Mumbai residence. Venkatesh walked 700 kilometres to fulfill his dream. Touched by Venkatesh’s gesture, Sonu spent some time with him and enquired about him and his family. Sonu later made a humble appeal to all his fans, urging them not to repeat such crazy acts.