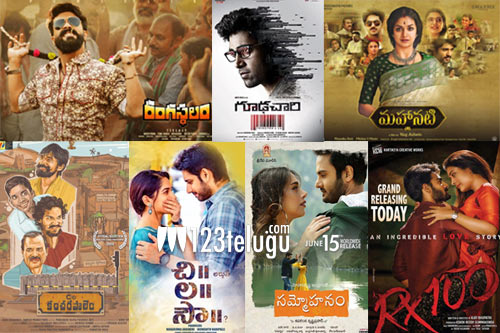 The year started for Telugu cinema in March with Sukumar’s finest outing till date, Rangasthalam. The movie is a political drama in a rustic setting. Sukumar who is well known for his out of the box and intelligent thinking came up with a simple story but with impeccable writing. The drama in the movie is the main highlight of the movie and easily world class writing.

May witnessed the unfolding of the story that needed to be told, the story of the Telugu cinema’s greatest actress ever, Mahanati Savitri. Mahanati is in many ways a path breaking movie that set the tone and a huge benchmark for the biopics to come. The cinematography, the music, the acting, the direction, the production designs, the dialogues and the narration are the things that made this movie an instant classic. Nag Ashwin needs all the credit for making this happen and for making this work with his dedication to the script he believed in.

Then in June came a movie by the talented Mohan Krishna, Sammohanam. This was a simple story but the movie stands out for one particular scene. The 10 to 15 mins scene with the lead pair on the terrace is one of a kind in Telugu cinema. Though it looked inspired by Notting Hill, Sammohanam stands out for its unique treatment of the sensibilities in the story.

This year’s most path breaking film title would obviously go RX100. No known faces except Ramki and Rao Ramesh, this became an instant hit thanks to its catchy sensuous teasers and trailers. But it impressed the audience that came to the theaters with its good story and even better story telling. The direction in the movie especially in the songs is so aesthetically handled and also satisfying the masses. The movie had its share of controversies like movies of this genre, but it emerged as a winner from day one.

Then came a week with two friends releasing their movies on same day and both were path breaking films. One of them was the blockbuster Goodachari. Adivi Sesh who won accolades and awards with his Kshanam gave Telugu cinema a spy thriller movie to be super proud of. Goodachari will remain Telugu cinema’s best spy thriller till date without any doubt. And now all eyes are on its sequel coming in 2020. While the other movie was Chi La Sow. This movie deserved more appreciation than what it got. Chi la sow is a story of a strong girl, raised by a single mom and a story that also deals with a mental condition in the most honest way. Anjali played by Ruhani Sharma is the best role written for an actress in recent times in Telugu cinema. The role is so well written that it does not fall into the clichés of the feminist ideals portrayed typically in Telugu movies but would stand among the strongest female roles written in Telugu cinema.

Let me conclude this list with the finest, the honest and the most rooted Telugu movie, C/O Kancharapalem. This movie is path breaking for many reasons. A producer passionate about telling a good story, a director who chose a story of the people around us and the actors who are people around us are the reasons why this list is incomplete without this movie.

Overall 2018 would go down as a golden year for Telugu cinema when pan-Indian audience sat up and took notice of Telugu cinema.