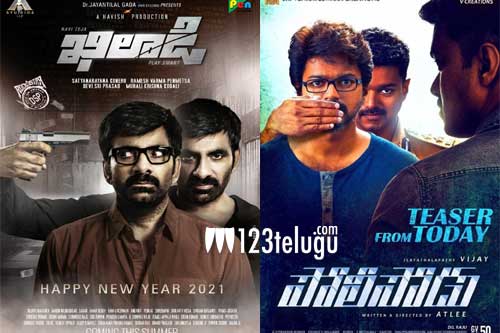 Hero Ravi Teja is currently working on an out-and-out entertainer titled Khiladi. The Mass Maharaj will be seen in dual roles in the film. Now, the latest poster released by the film’s team on the New Year’s Eve has led to speculations that Khiladi is a remake of Tamil star Vijay’s 2016 blockbuster, Theri (Policeodu in Telugu).

It’s well known that Ravi Teja was in talks with Kandireega director Santhosh Srinivas for Theri remake until last year. However, the project never materialized and both Ravi Teja and Santhosh Srinivas went on to get busy with their respective projects. But the latest poster from Team Khiladi has brought back Theri remake rumours. Well, let’s wait until the makers come up with an official announcement in this regard.

If Theri had Samantha and Amy Jackson as female leads, Khiladi has young beauties Meenakshi Chaudhary and Dimple Hayathi as the female leads. Koneru Satyanarayana is bankrolling the project.