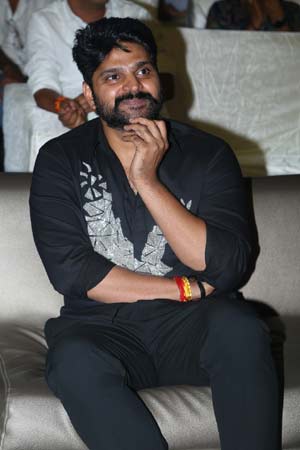 Sree Vishnu who is known for his different script selections is now coming up with the action entertainer Alluri which releases on 23rd September. The film’s pre-release event was held today in Hyderabad. Icon star Allu Arjun was the chief guest.

Speaking on the occasion, Sree Vishnu said that he and his team have invested five years in Alluri’s story. He praised his director Pradeep Verma who waited for a long time for an upcoming actor like him. The actor said that the film is based on true incidents with fictionalized characters.

The actor said that the entire police department is so great who has put in the herculean effort during the Covid time and added that this film is all about their greatness. Sree Vishnu thanked all the actors and technicians who worked on the film.

The actor recalled the time when Allu Arjun spoke to him during the Race Gurram movie. He said that Allu Arjun advised him to do only content-based films but not every film that he is offered.

The actor said that wherever he travelled, people recognized him as a S/O Satyamurthy actor and added that he showed his admiration for the actor in every film. Sree Vishnu ended his speech by saying that people will leave the theatres with heavy hearts after watching Alluri.