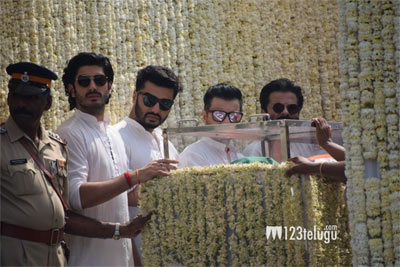 We all know that hero Arjun Kapoor is Boney Kapoor’s son from his first wife. Arjun has been quite silent all these years and has lived alone with his sister away from his dad after his mom passed away.

Many say that Arjun was not at all comfortable with Sridevi but kept all his feelings to himself and did not share much relation with his sisters Jhanvi Kapoor and Khushi either.

Now post the death of Sridevi, there has been a rapid change in Arjun as a source in the family says that Arjun Kapoor has been a strong support for not only Janhvi and Khushi, but also for his father, Boney Kapoor.

As soon as he got the news, he rushed back from where he was shooting to be with his sisters and has been looking after everything, right from the paperwork in Dubai to the funeral arrangements of the legendary actress.

Sridevi, who passed away on Friday was given state honors and has been cremated in Mumbai today.