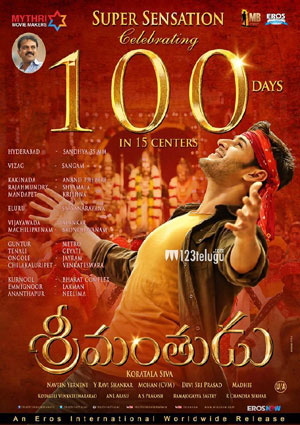 A much deserved achievement in its grand journey, Superstar Mahesh Babu’s last release, Srimanthudu, completes its 100-day run today in 15 theaters across the Telugu states. Directed by Koratala Siva, Srimanthudu was appreciated for its socially responsible story and the film also ended up as an all-time second highest grosser in the history of Telugu Cinema.

The sensational success of Srimanthudu reiterated once again that films with social message laced with entertainment always find discerning audiences. The film even inspired Mahesh Babu to adopt two villages in AP and Telangana, beautifully showcasing the strong bond between films and society.

Srimanthudu is also a special milestone in Mahesh Babu’s career as he turned producer and co-produced the film along with Mythri Movie Makers. Devi Sri Prasad’s chart bursting music and Shruti Haasan’s presence were a huge plus for the film’s solid run.