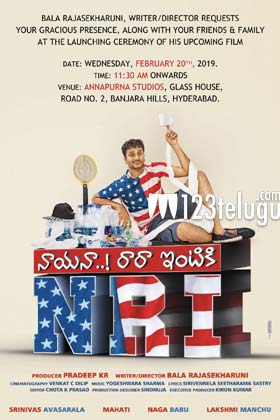 Talented actor-filmmaker duo, Srinivas Avasarala and Lakshmi Manchu, are all set to team up with each for a film, interestingly titled Nayana Rara Intiki (NRI). The film will have its muhurtham ceremony on February 20 at 11:30 AM at Annapurna Studios.

Going by NRI’s first look poster, it looks like Srinivas Avasarala plays the role of an NRI who visits his native place in India. Bala Rajasekharuni will direct the film. The film also features Nagababu in a pivotal role. Pradeep KR will be bankrolling the project. Yogeshwara Sharma will compose the soundtrack for the movie.
Attachments area