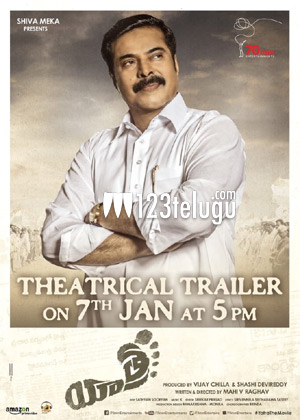 The makers of Yatra, the prestigious biopic on former Chief Minister of erstwhile Andhra Pradesh YS Rajasekhara Reddy, today announced that the film’s theatrical trailer will be launched tomorrow (Jan 7) at 5 pm. Needless to say, all eyes are on the trailer, thanks to the impactful teaser which created a positive buzz upon its release recently.

Yatra will be a tribute to the iconic Padayatra carried out by YSR, before he became the Chief Minister in 2004. Mollywood stalwart Mammootty is reprising YSR’s role in Yatra. Mahi V Raghav has directed the film. Vijay Chilla and Shashi Devireddy are jointly producing the film under 70mm Entertainments banner. Yatra is hitting screens on February 8.