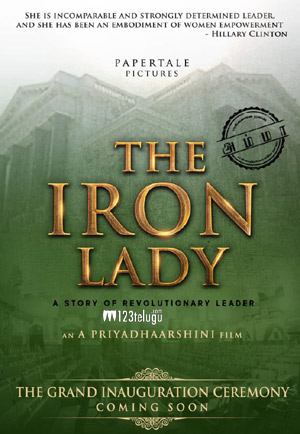 It’s been reported already that a biopic on the life and legacy of yesteryear heroine and former Chief Minister of Tamil Nadu J Jayalalithaa was on the cards. Priyadaarshini will be directing the movie.

This evening, star director AR Murugadoss unveiled the biopic’s title poster. The film is rightly titled The Iron Lady’ as a tribute to Jayaa’s strong persona. Although either Nitya Menen or Varalaxmi Sarathkumar are rumored to be essaying Jayaa’s role, the suspense will be unveiled at the film’s inaugural ceremony which will be held soon. Papertale Pictures will bankroll the project. Stay tuned for further updates.