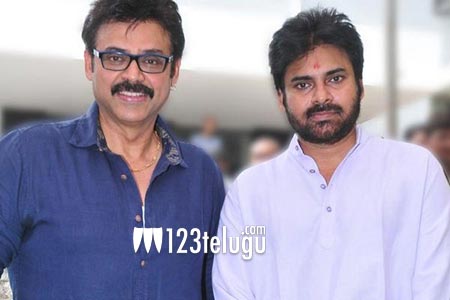 It is a known fact that superstar Venkatesh and Pawan Kalyan share a very close relationship with each other and have also worked in a film called Gopala Gopala which was a good hit at the box office.

The latest news is that Venkatesh is playing a cameo in Pawan’s new film and he is already shooting for his part today. The makers have kept Venky’s part as a secret but reports suggest that Venky will come at a crucial point in the film.

Directed by Trivikram Srinivas, this film has Anu Emanuel and Keerthy Suresh as female leads. Anirudh Ravichander composes the music for this film which is being produced by Haarika and Haasine Creations.