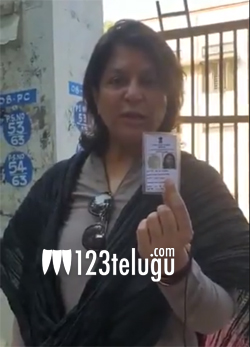 As the election fever is on, various activities have been happening since morning in both the Telugu states. Earlier today in Hyderabad, Charan’s mother in law, Shobana Kamineni didn’t find her vote in the list and was left furious.

The news is that she had checked ten days back and her vote was listed but when she came in to vote today, she didn’t find her name and the authorities said her vote was deleted.

An upset Shobana Kamineni even posted a video where she is seen asking for justice and saying that she had come to the country from an official trip just to vote.

My mom @shobanakamineni wasn’t able to vote today. She checked 10 days ago and her name was on the list ! Now it’s deleted !! She pays Tax !doesn’t she count ? Isn’t she valued as an Indian citizen ? #frustrated #furious #disappointed pic.twitter.com/BcWpql5lru