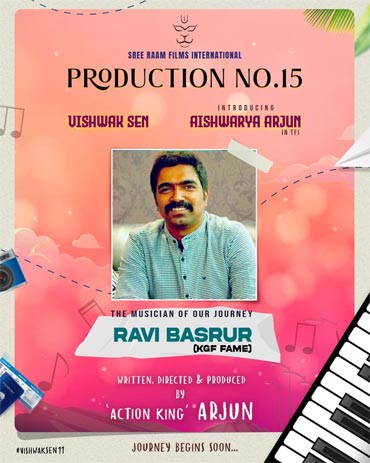 Young actor Vishwak Sen was last seen in Ashoka Vanamlo Arjuna Kalyanam. Recently, the actor’s next was officially announced and actor Arjun Sarja is the director of the movie. Now, another interesting update on the movie has been out.

The makers of the movie have officially announced that the happening music director Ravi Basrur of KGF franchise fame is roped in to compose the music for this movie, which was written and produced by Arjun Sarja. The project is getting bigger with the addition of top-notch crew.

The movie marks the Tollywood debut of Aishwarya Arjun, daughter of Arjun. Sai Madhav Burra is penning the dialogues for this yet-to-be-commenced movie. More details of the movie will be unveiled in the coming days.