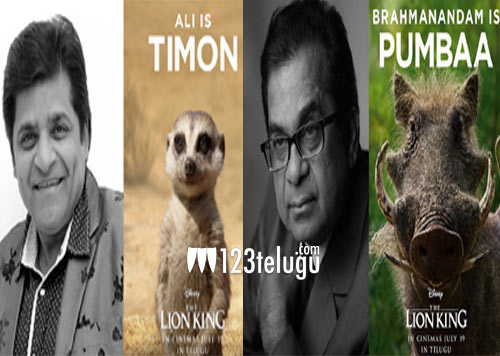 Star Tollywood comedians Brahmanandam and Ali will be lending their voices to the Pumbaa and Timon characters respectively in the Telugu version of the much-awaited Disney movie, The Lion King. This unique move by Disney India has surely raised expectations among the Telugu lovers of The Lion King franchise.

Already, there has been a curiosity about the stars who will be lending their voices to the other major characters like Simba and Mufasa etc in The Lion King’s Telugu version. Speculations are rife that Megastar Chiranjeevi and his son Ram Charan will dub for Mufasa and Simba respectively. However, let’s wait for the official announcement.

The Lion King is directed by Jon Favreau. The film is slated for release on July 19. The film will also have a simultaneous release in Telugu and Tamil, apart from the Hindi and English languages.