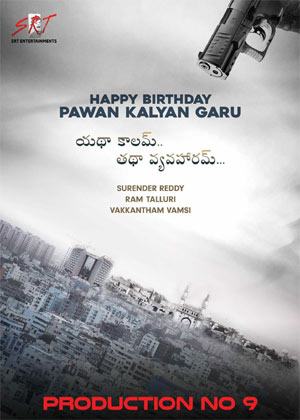 On the occasion of hero Pawan Kalyan’s birthday, the makers of of his next film under Surender Reddy’s direction unveiled a special concept poster this afternoon. Going by the poster, the film seems to be an action drama set in Hyderabad.

The intriguing poster only features a hand holding a gun and the city of Hyderabad in the background. The striking sanskrit quote “Yatha Kalam…Thatha Vyavaharam” further raises the curiosity levels.

This as-yet-untitled film will be produced by Ram Talluri under SRT Entertainments banner. Vakkantham Vamsi is penning the script. More details about the film will be out when the film goes on the floors next year.