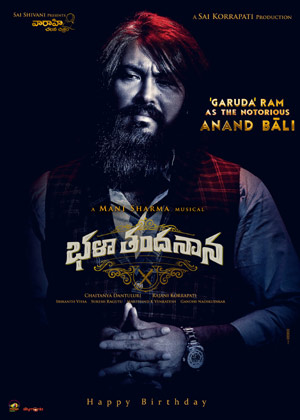 It is known that Sandalwood actor Ramachandra Raju, who played the main antagonist Garuda in KGF Chapter 1, will be seen as the main antagonist in Sree Vishnu and director Chaitanya Dantuluri’s Bhala Thandanana. The makers have just unveiled Garuda Ram’s first look poster from the film on the occasion of his birthday.

In Bhala Thandanana, Garuda Ram plays a notorious person named Anand Baali. The first look poster showcases him in a long hair and thick beard. Garuda Ram’s menacing look, evil characterisation, his typical body language and timing in Bhala Thandanana are going to different than what he has done before.