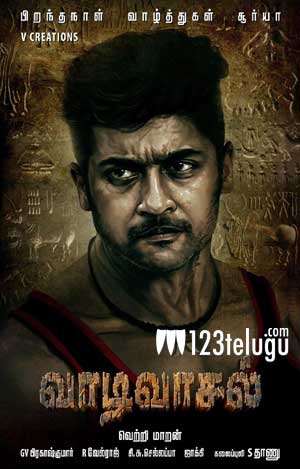 In a major surprise on Tamil star Suriya’s birthday, the makers of Vaadi Vasal have surprised the fans by unveiling the film’s first look poster just a while ago. Suriya looks stunningly intense in a rural look in this water color themed poster.

Vaadi Vasal is a village based revenge drama with the traditional Jallikattu backdrop. Suriya plays dual roles of a father and son. The film’s story is about the son taming the bull that killed his father. The film will be directed by acclaimed Tamil filmmaker Vetrimaaran and produced by senior producer Kalaipuli S Thanu. GV Prakash Kumar will be scoring the music. The film will be going on floors soon.