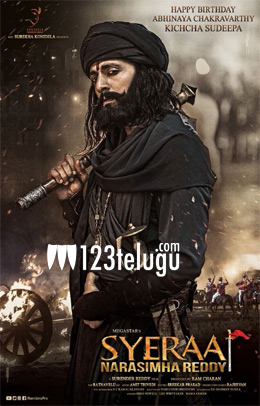 This evening, on the occasion of Sandalwood star Sudeep’s birthday, the makers of Sye Raa, the prestigious biopic on the first Telugu freedom fighter Uyyalawada Narasimhareddy, unveiled Sudeep’s look from the movie. Sudeep plays Avuku Raju in this highly-anticipated biopic.

Dressed in black and sporting long hair and a thick beard, Sudeep looks menacing in his warrior getup. Avuku Raju belonged to the Avuku dynasty. He joined hands with Uyyalawada Narasimhareddy in the latter’s battle against the Britishers in the Giddaluru revolt in 1846. The Avuku Raju was later captured by the British and was imprisoned in the Andaman Central Jail for several years.