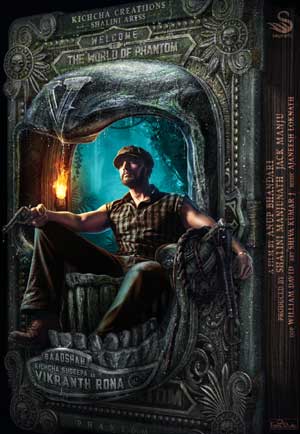 Sandalwood star Sudeep’s ongoing action thriller, Phantom, has been progressing at Annapurna Studios in Hyderabad. After the terrific intro teaser a couple of weeks ago, the makers have just released Sudeep’s striking look as Vikranth Rona.

Phantom is being directed by Anup Bhandari and produced by Manjunath Gowda. The promotional material that has been unveiled so far has raised the expectations among fans to the next level. This high budget entertainer will be hitting screens in summer next year. Shraddha Srinath is the leading lady and Ajaneesh Loknath is the music composer.