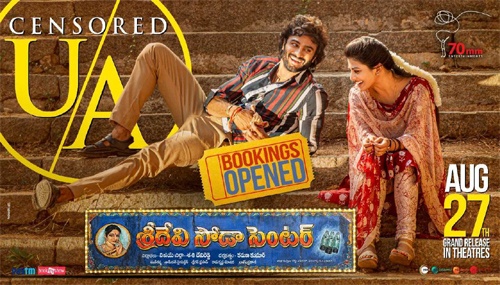 Sudheer Babu and Anandhi’s much-awaited rural action drama, Sridevi Soda Center, has been making all the right noises for the last few weeks. The film’s teaser, songs and the theatrical trailer that was launched by Mahesh Babu last week received positive response from all quarters.

According to the latest updates, SSC has wrapped up its censor formalities this morning. The CBFC has passed the film with a UA certificate. The duration of the film is 2:34 hours. The film is all set for a big release on August 27. Star hero Prabhas joined the film’s promotions and did an interview with Sudheer and the film’s director Karuna Kumar recently.