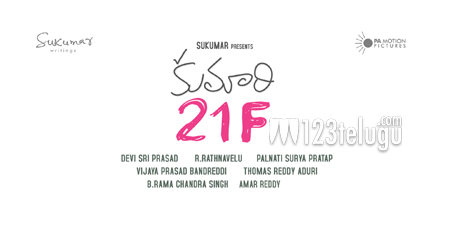 We have already reported that creative film maker Sukumar is presenting a flick ‘Kumari 21F’ under his production house Sukumar Writings. He is producing this flick in association with PA Motion Pictures and Uyyala Jampala fame Raj Tarun and debut actress Heena Patel are playing the lead roles. Palnati Surya Prathap of ‘Current’ fame is the director.

As per the latest update, the entire talkie part is completed and the post production works have begun for this flick. The audio will be unveiled soon and the movie is expected to hit the screens later this year. Devi Sri Prasad is the music composer and Ratnavelu is the cinematographer.