Sulthan’s success will be my birthday gift: Rashmika Mandanna
Published on Apr 1, 2021 1:08 am IST 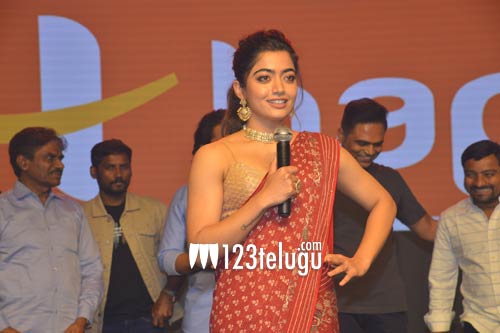 Young actress Rashmika Mandanna’s speech at tonight’s pre-release event of her soon-to-release action entertainer, Sulthan, was full of energy and exuberance. “I am having a lot of fun, but I’m also nervous and excited as Sulthan is my debut film in Tamil,” the actress said.

Rashmika further added that Sulthan is releasing on April 2nd and that her birthday is on the 5th. “Sulthan’s success will be my birthday gift,” she quipped. The actress, who is shooting in Mumbai for her maiden Bollywood film, Mission Majnu, said that she flew down to Hyderabad just to meet Sulthan’s hero Karthi, director Bakkiyaraj Kannan and producer SR Prabhu and of course her fans.