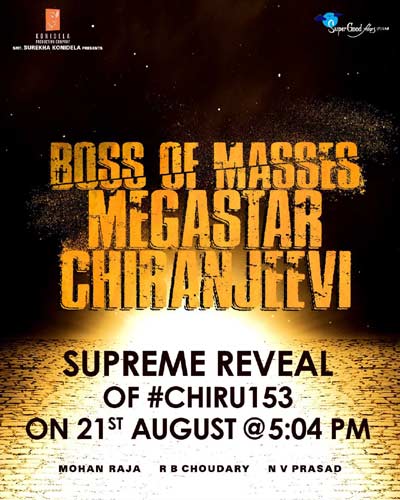 The regular shooting for Megastar Chiranjeevi’s much-awaited Lucifer Telugu remake kick-started earlier this week in Hyderabad. Now, on the eve of Chiru’s birthday, the film’s makers are going to unveil a ‘Supreme Reveal’ tomorrow (Aug 21) at 5:04 PM.

Given the timing of the surprise reveal, the Supreme Reveal is expected to be Chiru’s first look from the film. Whether or not the makers will also make an official announcement regarding the film’s title will be known only tomorrow.

Being directed by noted Kollywood director Mohan Raja, this 153rd project of the Megastar is produced by veteran producers NV Prasad and Super Good Films’ RB Chowdary with Ram Charan as the presenter. Thaman is composing the soundtrack.