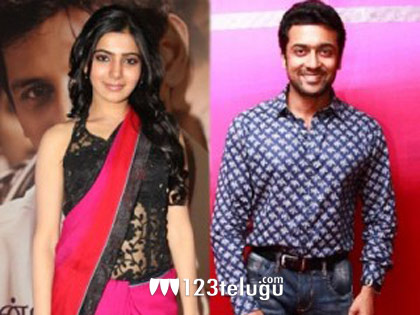 Two of the biggest stars in South, Suriya and Samantha are teaming up for an action entertainer. This untitled Tamil film is going to be directed by Lingusamy, who had earlier made films like Paiyaa and Vettai. Buzz is that Suriya and Samantha have already allotted their dates for the film and if all goes well, the film will go on floors towards the end of April.

Incidentally, this is the first time Suriya and Samantha are teaming up for a film. Although Samantha is one of the top stars in Telugu cinema, she’s yet to claim the top position in Tamil. So far, only S S Rajamouli’s Naan Ee became a huge hit in Tamil, whereas Gautham Menon’s Neethane En Ponvasantham was an average fare at box-office. In a way, this film with Suriya is going to be Samantha’s biggest film till date in Tamil. More details about this film will be announced soon.

Currently, Suriya is busy with the shooting of Singham 2 in South Africa and Samantha is filming for her upcoming film with Pawan Kalyan in Hyderabad.