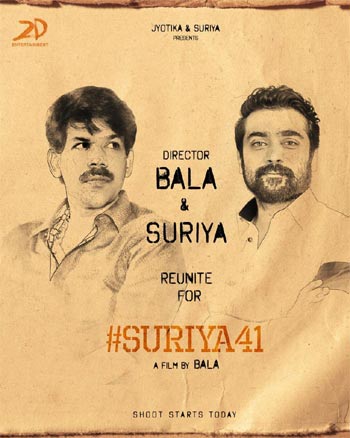 Suriya was last seen in ET which was directed by Pandiraj. Now, he has teamed up with his mentor Bala for a serious drama. Now, the latest update is that the film was launched today with a formal pooja in Kanyakumari. The shoot of the film is also underway as of now.

This film will be produced by Jyotika and Suriya and Co-produced by Rajsekar Pandian of 2D Entertainment. It has been 18 years since Bala directed Suriya. The star hero is quite excited to work with his mentor and shared his happiness on Twitter.

“Been waiting for #DirBala na my mentor to say Action!!! …After 18 years, it’s happiness today…! This moment… we need all your wishes! #Suriya41 ,” tweeted Suriya. Bala has prepared another unique and intriguing story for Suriya to present the actor in a very different role.