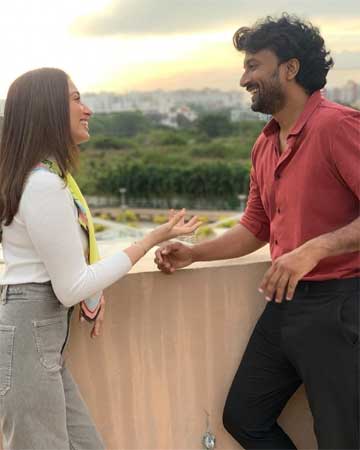 Tamannaah has been a busy bee in the past few weeks. After wrapping up the shoot of her OTT film, 11th Hour, the actress moved to the sets of Seeti Maar in Hyderabad. Earlier this year, she was in Chennai to finish the shoot of her upcoming Tamil OTT project November Story.

Now, the actress is in Bangalore where she is shooting for her next Telugu film, Gurtunda Seetakalam. Directed by Nagashekar, the film is a remake of a Kannada hit film, Love Mocktail. Tamannaah is playing the lead role in the film alongside Satyadev, and it is the first time that the duo will be seen together in lead roles.

Sharing a candid picture from the sets of the film, Tamannaah said, “Laughter, Conversations and a beautiful sunset, what a perfect way to start my new film.”