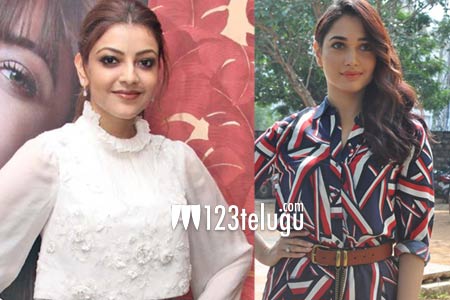 The Telugu and Tamil versions of Queen are finally nearing completion. Although the film’s shoot began in the second half of 2017, the shoot got delayed owing to date issues. Moreover, after Neelakanta opted out of the Telugu version, the makers spent quite a bit of time to find a replacement before they got Prashanth Varma onboard.

The entire film’s shoot has already been wrapped up, except for some patchwork. Earlier this week, Tamannaah and Kajal shot for their respective versions in Mumbai, and both the actresses will wrap up their work by the end of the week. In fact, reports suggest that Kajal has already completed her shoot and she has gone to Chennai to join the sets of Indian 2. While Prashanth Varma is directing the Telugu version, Ramesh Aravind has been directing the Tamil and Kannada version.

Parul Yadav, who also played the lead role in Kannada version, is one of the co-producers of this project. The Telugu version is titled ‘That is Mahalakshmi’ and it also stars Shibani Dandekar, whereas the Tamil version, starring Kajal and Elli Avram in a key role, has been titled as Paris Paris.