Tamannaah launches the Telugu trailer of The Legend.
Published on Jul 16, 2022 7:20 pm IST 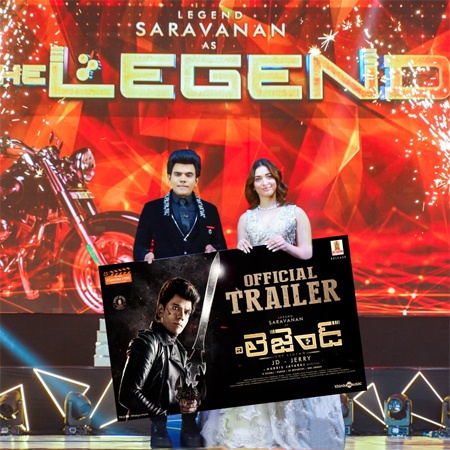 Businessman and owner of Saravana Stores, Legend Saravanan is making his film debut as a hero with the big-budget multilingual movie ‘The Legend’. The film is being produced by the actor himself. It is written and directed by JD Jerry.

The film’s Telugu trailer was launched by Tamannaah Bhatia this evening. Going by the trailer, the makers have spent a bomb on the film which is clearly visible in the rich production values. It is said that close to 200 crores were spent on the movie.

The film revolves around a scientist who focuses on using his education and knowledge as weapons for the well-being of his country.

The movie will have a grand release worldwide in Tamil, Telugu, Kannada, Malayalam, and Hindi languages on July 28th. Tirupathi Prasad of Sri Lakshmi Movies will be releasing the movie in Telugu states.