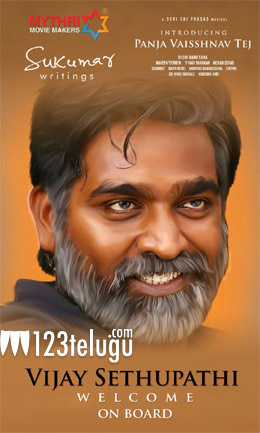 We were the first ones to reveal that Tamil star, Vijay Sethupathi is in consideration to play a key role in Vaishnav tej’s debut film in the production of Sukumar Writings and Mythri Movie Makers.

Now, the makers have confirmed that Vijay has indeed signed the dotted line and will play a negative role in the film. The talk is that as soon as Vijay heard the story, he said yes to the film.

Now that he has sorted all the dates, he has officially signed the film. Debut director Buchi Babu will helm this project which will have music by DSP.