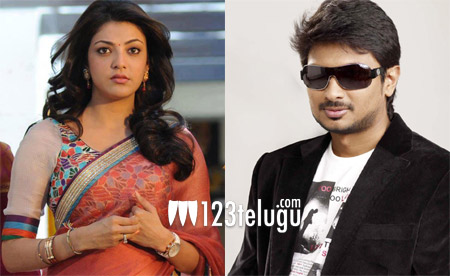 Young Tamil hero Udayanidhi Stalin, who is known to us with the film ‘Ok Ok’ is a angry man these days. The reason for his anger is none other than the happening Kajal Agarwal. According to the latest update, Stalin has complained to the producers council against Kajal for some monetary issues.

In his complaint, Stalin alleged that Kajal has to repay his 40 lakhs which was given to her as the signing amount for one his productions. Stalin also added that when contacted Kajal, she denied returning the money and assured him that she would consider it as advance for yet another project in his banner.

An upset and adamant Stalin went ahead and complained about the same. According to our Chennai sources, Kajal was initially signed for Stalin’s Nanbenda, but for unknown reasons she was dropped and Nayathara was roped in for the film which is currently on floors.
The producers council is looking into the issue, and will soon come to an conclusion. Kajal is busy shooting for Ram Charan’s GAV in London currently.